I’m not gonna lie and say I’m not glad, but it’s a little bittersweet. I remember feeling the same way last year.

A loooooot of people asked why I was doing this and the answer is really twofold: One, I’m a content creator and this drives people to the site. It’s really that simple. But two, as a writer, it’s really hard and really fun to push yourself like this. And I don’t do it enough to myself. (It’s sort of the same reason why people do NaNoWriMo every year.) I’ll miss having the obligation to write, just as much as I’ll miss having the reason to.

But as hard as it is to do this doing the holiday season, it’d be harder to continue — I’m starting a new job and moving to a new city in the new year! Don’t worry, I’ll bring it back next year, and in the meantime, you can get plenty of content year-round here, and on our Facebook, Twitter and Instagram pages!

Now onto the main event!

Ever since Day One, people have been asking me to cover Emma Thompson’s acceptance speech for Best Screenplay at the 1995 Golden Globes, when she won for Sense & Sensibility. I am ashamed to say I’ve never seen it!

So just for you, I finally watched this hilarious and poignant acceptance speech — really, I would have expected nothing less of Dame Emma!

Of course, it’s everything you all promised me and more. Emma was up against some TOUGH competition that year too! Emma’s wonderful adaption won over Mr. Holland’s Opus, Get Shorty, Dead Man Walking, Braveheart, and one of my personal favorites, Aaron Sorkin’s The American President. I have to say, it warmed my little feminist heart to see her stomp out 5 men for the win 😉 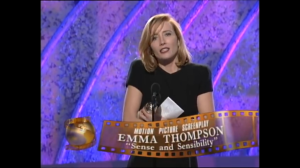 And how cute was it that she was too tall for the microphone??

And then she proceeded to charm the ENTIRE audience by accepting the award as though she were Jane Austen.

In case you’re unable to watch the video, or are sitting around trying to ignore your family, here’s a quick transcript:

Four A.M. Having just returned from an evening at the Golden Spheres, which despite the inconveniences of heat, noise and overcrowding, was not without its pleasures. Thankfully, there were no dogs and no children.

The gowns were middling. There was a good deal of shouting and behavior verging on the profligate, however, people were very free with their compliments and I made several new acquaintances.

Miss Lindsay Doran, of Mirage, wherever that might be, who is largely responsible for my presence here, an enchanting companion about whom too much good cannot be said.

Mr. Ang Lee, of foreign extraction, who most unexpectedly apppeared to understand me better than I undersand myself.

Mr. Pat Doyle, a composer and a Scot, who displayed the kind of wild behavior one has lernt to expect from that race.

Mr. Mark Canton, an energetic person with a ready smile who, as I understand it, owes me a vast deal of money. Miss Lisa Henson — a lovely girl, and Mr. Gareth Wigan — a lovely boy. I attempted to converse with Mr. Sydney Pollack, but his charms and wisdom are so generally pleasing that it proved impossible to get within ten feet of him.

The room was full of interesting activitiy until eleven P.M. when it emptied rather suddenly. The lateness of the hour is due therefore not to the dance, but to the waiting, in a long line for horseless vehicles of unconscionable size. The modern world has clearly done nothing for transport.

P.S. Managed to avoid the hoyden Emily Tomkins who has purloined my creation and added things of her own. Nefarious creature.

With gratitude and apologies to Miss Austen, thank you.

I did some digging on who all of the people are that she mentions in the speech:

Miss Lindsay Doran of Mirage, of course, was the film’s producer. (Mirage was the production company.) Ang Lee was the Director and James Schamus one of the co-producers. (Don’t ask me why Doran gets producer credit but Schamus is a co-producer? Wouldn’t having more than one producer make them all co-producers?)

Kate Winslet is, of course, her co-star as Marianne Dashwood, and Pat Doyle I mentioned in Day 2, as the music conductor of Scottish extraction for both this film and several of the Harry Potter series too.

Mark Canton was the studio chief of Columbia-TriStar at the time, which makes her remark about him owing Austen money all the more saucy for knowing the inside joke. Lisa Henson (Yes, of THAT Henson Family, and now President/CEO of The Jim Henson Company, i.e. the Muppets) was the lovely girl President of Columbia Pictures in 1995, and the lovely boy Gareth Wigan was a production consultant who would go on to be named joint-vice chairman on Columbia Pictures within 2 years of Emma’s speech. He’s blatantly responsible for much of Ang Lee’s success in English-speaking markets, as well as a host of other creators outside of the Hollywood bubble. He also worked on the original Star Wars as a young producer in the 70s! (Unfortunately, Wigan passed on in 2010 at the age of 78.)

Sydney Pollack was the film’s executive producer (again with the extra fancy producer hierarchies!) who you may also recognize for such films as Out Of Africa, Tootsie, The Way We Were and The Reader, with Kate Winslet.)

And, after searching Google frantically and fruitlessly for at least the last 10 minutes, I’ve suddenly realized that “the hoyden Emily Tomkins” is actually a mangling of “Emma Thompson” and I am a dolt who did not get the joke for far, far too long 🤦🏻‍♀️

Anyway, Emma looks wonderfully happy, and this speech will go down in Janeite history as inspired and just downright lovely.

I hope you all have enjoyed the series, it was certainly easier to watch 25 days of Sense & Sensibility than it was to watch 25 Days of Pride & Prejudice, but I’m not sure if this year’s writing suffered for that or not. What do you think? What would you like to see us do next year?

From the bottom of my heart, thank you for following along, and remember you can catch our wit and fun all year long on any one of our social media pages!