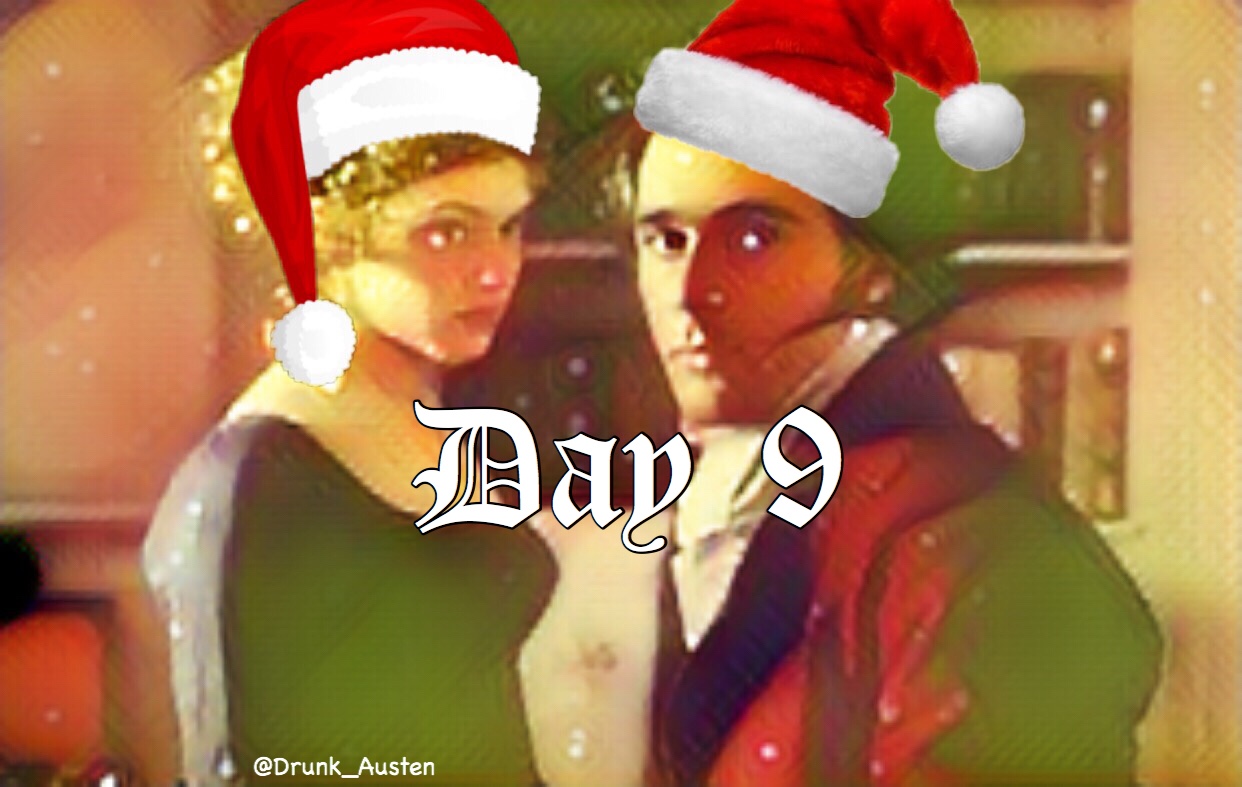 ‘Twas the night before the ball, when all through Barton Cottage,
Not a Dashwood was stirring (and goddammit nothing good rhymes with cottage),
The empire waist dresses were hung by the wardrobes with care,
And soon they would tend to their faces — their makeup and hair.

The sisters were nestled all snug in their beds;

While visions of wealthy men danced in their heads;

And Margaret with her atlas and Mrs. Dashwood in her bonnet,
Had just settled down after a nice long sonnet.
When out on the path there arose such a clatter,
Marianne sprang from her bed to see what was the matter.
Away to the parlor she flew like a flash,
She ran to the door and threw it open with a crash.
The moon on the hills of the rolling green grass,
Gave some light to the strange objects there amassed,

And what to her wondering eyes did she see then?

But a fashionable barouche followed by eight mad men,

With a driver so handsome, charming, and carefree,
She knew in a moment he must be John Willoughby.
Pulling at the cart, his pursuers, they came,
So he whistled, and shouted, and called them by name:
“Now, Brandon! Now, Ferrars! Now Bingley and Darcy!
Oh, Bertram! Oh, Wentworth! Oh, Tilney and Knightley!
What are you doing? You’ll surely make me fall!
Now fuck off! Fuck off! Fuck right off, you all!”
And they chased and they ran and they chased some more
To pursue ’til Willoughby was surely done for.
Around the green hills, the men they flew,
But catching the barouche, they knew not how to!
And then, in a moment, Marianne heard a crash:
The men had caught up and began to thrash!

“Willoughby! We’ve had enough of your shit!

You give all of us a bad name, you fumbling half-wit!”

They beat and they jeered until they were done.
His clothes were all ripped and his cravat undone;
With a black eye from Brandon and from Knightley a cut on the cheek
And his fine suit a mess, Willoughby began to speak:
“Good men,” said he, with a smirk on his lip,
“How can I stop…?” He shrugged, then he smiled a bit.
His droll little mouth was drawn up like a bow,
And the cut on his chin, a look so full of fake woe–
Ferrars clenched his fists, and Bertram said something foul.
“You’re a horrible person,” said Brandon with a scowl.
But Willoughby just snickered and let out a laugh.
The eight men all frowned, annoyed at the gaffe
He never would learn, no, now they could see that,
So they thought and they thought and they had a chat.
Marianne waited anxiously by the door,
To hear what plans the men had in store.

They spoke not a word, but went straight to their work,

Picked him up and put him on the carriage seat with a jerk.

Then turning to the horse and giving it’s ass a SLAP!
The horse started and reared and ran off madcap
“There goes our problem boys,” said Brandon with a grin.
“Watch him run away, and next season, he’ll be a has-been!”
Then she heard them exclaim, with hearts light and glad—
“Run away! Run away! Run away Willoughby! And never come back, you rake! You cad!”
With sincerest apologies to Clement Clarke Moore.
-R