Though “high tea” as we use it today isn’t the same as what Jane Austen herself would have experienced, it’s still an activity that’s closely tied to meetings about her.

Last week I was asked to make a tea. I’ve only taken on this task a few times and it’s always a huge undertaking, especially for more than one person, but it’s totally worth the effort once it’s done. 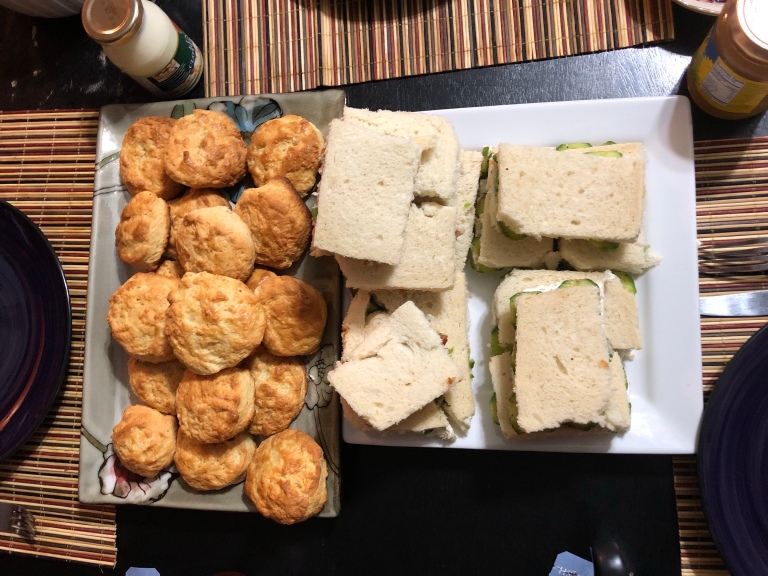 To clarify, what I made was an afternoon tea, which includes scones, sweets, salads and sandwiches. There’s a handy guide below for helping you understand the variations between “tea times.”

Many of you had questions about my tea, so I thought I would put the recipes here for anyone who wants to make it. For the tea itself, I like to let people cheese their own tea bags. But if everyone is ok with one kind of tea, make a pot of that to be served throughout.

These are not precise recipes, but I hope they help you. Enjoy!

So I cheated for the scones, but I had good reason! Though I could make my own scones, I happened to have a packet of scone mix on me. This isn’t any mix, it’s from a small company that started in Chico, California, where I went to college for my undergraduate degrees. I first spotted these ladies years ago at a farmer’s market, a table laden with lemon curd, scones and more. I’ve since moved away from Chico, but I never forgot their scones. Over the holidays I went to a local Dicken’s Fair and was shocked to see the very same ladies I used to see at market. They’ve expanded their line and now show up to big cities. Anyway, I couldn’t resist trying their scones again, and they were lovely.

I bought clotted cream and lemon curd at local stores, but if you’re in a pinch (purists, turn away) jam and butter work ok.

Serve scones on tray with bowls of lemon curd and cream ready to be slathered on.

Curried chicken salad sandwiches are usually a standard for tea, but I don’t eat meat! This is my take on that classic.

Cook patties, or whatever meat/meat alternative product you want. In a big bowl, put chopped green onions and pickles, then a big dollap of vegenaise. Once patties are done, cut into chunks and put in big bowl. Mix up.

Cut the crusts off the bread, place one crust less piece on plate or board, spoon chicken salad onto it and spread evenly. Place second piece of crust less bread on top, cut in half. You can do triangles or rectangles.

I like to be fancy and cut four sides of the cucumber skin off. Slice cucumbers into thin slices. Put cucumber slices in large bowl, put one tablespoon of dill and one cup of vinaigrette in bowl, mix up. Put in fridge for a few hours, stir every once in awhile.

To make cream cheese spread, put softened cream cheese in bowl, sprinkle dill in a little at a time as you mix. I add about a teaspoon to one package of cream cheese, but you can do it to taste.

Serve stacked cutely on a plate.

Boil beets, this could take awhile, but you want to be able to easily put a knife through it. I like to cut the large beets down into thirds to speed up the boiling process. When done cooking I pour out the boiling water and put cold in. Once the beets are cool enough to touch the skin should slide right off. I rinse the chunks one more time before putting them in a bowl and setting them aside.

When beets are all done being prepped, but into smaller cubes. If you want this as a cold salad, put beets in fridge. You can also have it a little warm.

In large bowl, place beet cubes, arugula (to taste, sometimes this is more of an arugula salad, sometimes it’s more of a beet salad, it just depends on the ratio) and chunks of goat cheese. Pour balsamic to taste over salad and gently mix a little. Mixing too much will make the goat cheese a little too spread around.

Serve with chunks of goat cheese on top.

In a glass bowl, or large bowl that’s good for presenting, layer brownies and whipped cream. I like to do just one layer of the raspberry jam because it’s usually a strong flavor.

I try to make the whipped cream be a top layer so it looks cute.

Serve with huge spoon to get a little of all the layers. 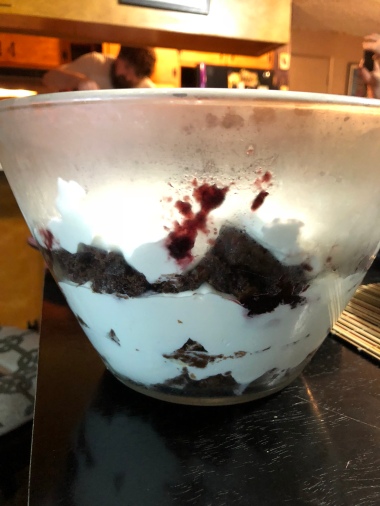