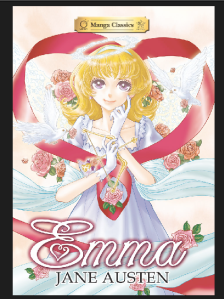 I got this manga version of Jane Austen’s “Emma” through NetGalley. I’ve read a couple of manga stories, so I’m familiar with the motifs and exaggerated emotions. I don’t think purists will like this interpretation because of that, but I do think younger readers will like it.

The manga opens at the Weston’s wedding, and we meet Emma and her father. Soon we see Emma in action, trying, unsuccessfully, to be town matchmaker.

The costumes were sometimes Regency-esque, but Emma’s hair was long and down most of the time, which looked like a standard manga illustration, but would irk those of us familiar with Austen.

I will say that I appreciate that Knightley was highly attractive. I had never imagined him with a goatee, but somehow it works (and makes me feel a little weak in the knees). 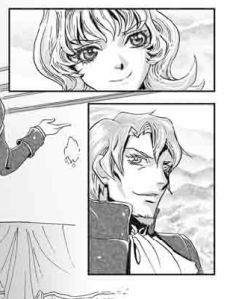 I won’t spoil too much about how the other characters are portrayed, but I do like that Frank Churchill was drawn as a dandy.

There were times I didn’t like the exaggerated reactions that are typical in manga, but that’s just because I feel really loyal to the original version and couldn’t imagine Emma freaking out to that degree. 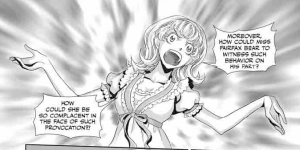 The story was very abridged, but I will say it touched on the highlights of the novel and captured the overall feel of the original. Plus it’s a super quick read.

Who should read this?

Young Janeites-in-training. I think this is actually great for getting people into Jane Austen, but not good for people who are die-hard fans.

What to drink with this

I suggest a sweet, milky tea.